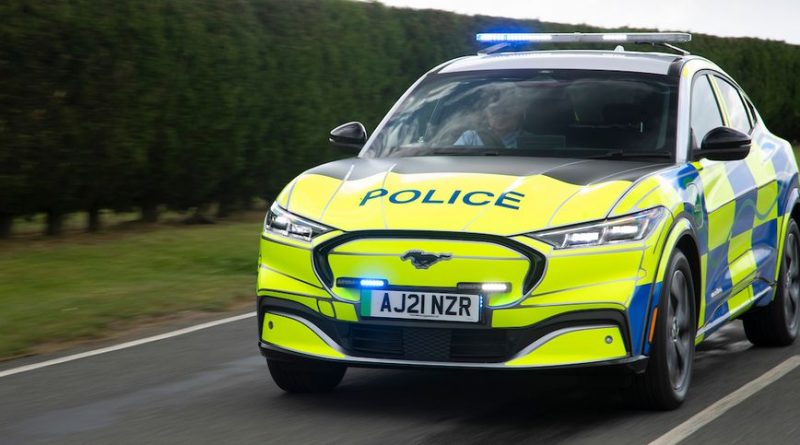 EVs make a lot of sense for city services, but stateside departments are a long way from adopting them.

While a number of police departments in the US have purchased a few Teslas—perhaps not as fully outfitted patrol vehicles with all the gear—yet another electric model is showing police potential, this time with all the trimmings. Ford is currently working with a number of police agencies in the UK that are evaluating the Mustang Mach-E for patrol duties, including London’s Metropolitan Police Force.

The automaker has brought a Mustang Mach-E police vehicle demonstrator in standard-range, all-wheel-drive guise to the Emergency Services Show at the NEC in Birmingham, England, eager to show off the electric crossover to the UK’s finest. Essex-based Safeguard SVP outfitted the Mach-E to UK police specs and livery that, you might notice, are designed to increase the visibility of police cars, instead of intentionally decreasing it.

“The Metropolitan Police Force has already appraised the standard Mustang Mach-E and has now requested a full evaluation of the marked concept,” the automaker said. “Also waiting for an opportunity to try the new 999 vehicle are the Sussex, Surrey, South Wales, Dyfed Powys, Devon & and Cornwall, and Police Scotland forces.”

The Mach-E already has a lot going for it when it comes to police needs, including a 0-62 mph sprint time of just 3.7 seconds offered by the GT version. But its range also makes it ideal for fleets, as such vehicles tend to have fairly set daytime driving needs, and can recharge in their garages between shifts. The interior accommodations of the Mach-E are also quite generous by UK standards, able to carry plenty of gear while offering some light off-road ability which comes in handy in dense cities, when police cars need to crawl up on the curb to park or turn around when responding to calls. Sourcing power for the radios, lightbar, and other equipment is also fairly straightforward and is designed to avoid drawing power from the powertrain battery.

“The vehicle range is uncompromised as the blue light equipment is being drawn from the vehicle’s 12V battery and not the drive battery,” said Terry Adams, BlueLight Direct sales manager, Ford of Britain and Ireland.

“In future developments we will look to increase this battery capacity to allow for additional equipment to be fitted.”

We can’t help but feel that the Mach-E could make for a suitable police vehicle in the US as well, though the vast majority of police cruisers tend to have pretty rigid equipment requirements, including those for a perp cage for the rear seats. Police agencies in the UK tend to use special vans for suspect transport, so the bulky partition inside is much less of a concern. Just how well the Mach-E could lend itself to that sort of equipment remains to be seen if it’s outfitted for regular duty. But there’s nothing really that prevents it from being used as a supervisor’s vehicle in departments stateside.

Even if the Mach-E doesn’t quite take off in the US as a police vehicle, surely an electric Ford Explorer is around the corner anyway. So it probably won’t be too long before that model will be able to pull off sub-four-second launches as well.